NOTE: When I was directing Bowling Green State University’s study-abroad program in Salzburg, Austria, in 1998-99, I wrote a series of letters to the faculty list back at BGSU. I got wonderful responses, so I kept writing them! This is the first one, from September, 1998. It reflects on changes since my last previous stay, in 1993-94.

Greetings from Salzburg, Austria. I am here for the third time now to

direct our Academic Year Abroad program for juniors and first-year

master’s students. It is a great opportunity for them to improve their

German and learn to live in a foreign culture. The program celebrated

students with a challenging but organized international experience.

This year 26 students will participate. I thought it might be nice

occasionally to send reports and impressions back to BGSU.

Goodbye to the Schilling

What has changed since I last left in 1994? Quite a bit, actually. I

showed my passport to enter Austria between planes in Brussels,

Schengen group of European Union countries, who have dropped their

interior borders. Austria joined the EU in 1995 and will participate

in the currency union that begins in January 1999, so we will soon (by

2002) say goodbye to the Schilling coin with its Edelweiss blossoms,

and Sigmund Freud on the 50-Schilling bill.

until 5 pm. Now, many stores stay open every Saturday until 4 or 5.

two days (stores are closed on Sundays) is past. Yet the Saturday afternoon

feeling that you can and should do something besides

contribute to the economy is also gone. Sundays still have that

feeling, but I can only predict that the dominance of economics and

convenience will expand and even Austria will see shopping 24-7, as

The consequences of Austria’s shift toward convenience are immediately

visible. In the Old Town, the heart of Salzburg and the reason why

tourists come from all over Europe, Japan, and the US, there are many

empty storefronts. Why? It’s easier for people to go to the big

than to brave the narrow, often cobblestoned streets and search for

the rocky hills among which the city is nestled.

before), only big stores with lots of of overhead and large staffs

will be able to compete, and even more of the mom-and-pop stores

butchers, bakers, grocers, stationers, and cafes that real people use

This kind of thing is already in evidence. Across from Mozart’s

birthplace—although a museum, it’s really the house he was born in–

there is something called “Mozartland.” It is full of spin-off

merchandise based on cartoonized characters of young Mozart and his

family that are shameless Disney ripoffs, in other words, imitations 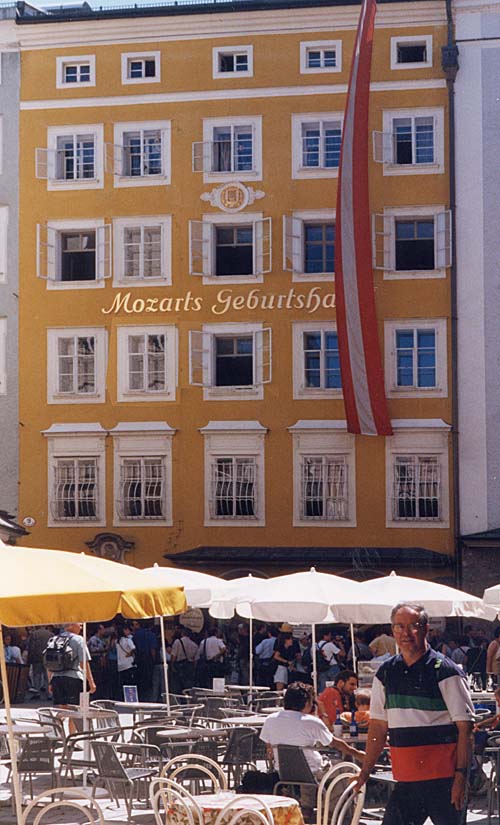 “Community”: support and cooperation within a group that cannot afford to avoid each other.

On the other hand, the reason Austrians used to live crowded in

cities, ride buses instead of driving private cars, and use specialty

shops instead of supermarkets is because they couldn’t afford anything

else, and women stayed at home to do all that daily shopping.

“Community” can be defined as support and cooperation within a group

that cannot afford to avoid each other.

Now the Austrians, with country houses, nice cars, and shopping

centers, can afford to can the quaintness. The trick is to keep people

thinking that you’re authentic even as you abandon authenticity for

reality. Otherwise the tourist trade might dry up, too, and there goes

the affluence that allowed you to be modern.

The specialization of space

It’s a dilemma that we don’t encounter as often in the US, because

long ago we made the choice for the horn of plenty. As a teenager I

experienced the death of my hometown downtown as the malls grew. The

specialization of space continues so that people live, shop, and work

in entirely separate worlds, and we are so eager to avoid each other

Indians) for the purpose of putting space between us.

Occasionally there is a whimper from the other side of the question,

Battle of Fallen Timbers. I don’t think we should, but it will

certainly be a fitting tribute. Tecumseh (eventually) died so that we

can shop on Sundays.

For the time being, though, when I come to Salzburg I still live where

people work and engage in commerce. I prefer to ride the bus, even

though we have a car, because all too often the convenience of

get through an intersection. On the bus at least you can hear the

people cursing at you.

prepared as quickly as possible, to appeal to as many people as

possible, and to survive a 2000-mile ride in a semi truck. I also

enjoy being a tourist, having the old monuments and mementos all

around me, and I trust they’ll stay here as long as their ability to